Grits. Simple. Unadorned. In the South, if you truly grew up here, there is a primal instinct to crave Grits. People don’t understand this outside of the region, in fact you may not even be able to find Grits on the grocery shelves in other regions of the country, much less the world. I have a friend whose daughter moved to Los Angeles a decade or so ago, who would whine so pitifully for grits that her mother bought and sent her a bag of grits from time to time. The same thing happened when a friend’s sister moved to New York around the same time frame- ‘Well, I guess she’s homesick, she wants me to send her a bag of grits.’ To be fair, some of the great chefs have taken a low class food like grits and have elevated them to a delicacy once known as breakfast grits for fishermen or laborers near the coastal areas of the south- to Shrimp and Grits, but if a poll were taken I would be willing to bet these same chefs in major cities outside of the South would never eat Grits for breakfast! In the South, field hands to fine gentlemen, get it- they want and expect Grits for breakfast! From nursery food, to sick beds, to hearty men’s breakfasts, and ladies brunches- you will always find Grits on the savory side of the menu, never the sweet.  I can’t say it any better than Alabama girls, Deborah Ford and Edie Hand in their ‘GRITS Handbook’ *-

‘Grits are eaten with butter, gravy or cheese- never sugar.’

Y’all, trust me on this- true Southerners crave Grits from their bassinets to their deathbeds. Grits are the ultimate comfort food, considered a healing aid, a cure for the sick. I once heard my grandmother say, ‘I knew he was real sick, when he turned his nose up at a bowl of grits.’  Grits are like kinfolks, we sometimes take them for granted, they are the unsung companion to many a fine meal. Grits are the big-hearted, open-to-embellishment relative at the Southern table, it accepts additions graciously- butter, cheese, shrimp, crumbled sausage and bacon, even eggs have been poached in Grits’ Casseroles. Just remember, never sugar. There is a limit to even the most generous among us! You will never find Grits on a dessert table so why would you even think of adding sugar?  We southerners love our food, we talk about it- we pass recipes down and around; what we may have lacked in fortunes, was more than made up for on food laden tables, generously shared, eaten heartily without shame or daintily with lively conversation. Even when we’re eating out, someone will say ‘Here, try this’ – to say ‘No’ –is out of the equation you will just hear- ‘Really, you have to try this.’- as we put at least one bite over on the loved one’s plate. We can get downright biblical about food– someone once asked, ‘How many people will that pot of grits feed?’ The answer? ‘Oh honey, multitudes.’ Grits have served multitudes, down through Southern history- using the basic elements of fire, water, salt and that most ancient food- Corn.

In my southern childhood innocence, there was no doubt Goldilocks interrupted the Three Bears’ breakfast of Grits, not porridge! Southern women have a distinct, almost unnatural fascination with ancestral food, like Grits. We rely on family recipes, our grandmothers’ ancient potions and mysterious cures. When prescriptions or modern medicine fail us- we offer Grits as part of a curative white diet, along with chicken broth, weak tea, ginger ale, soda crackers, rice, dry toast,mashed potatoes and scraped apple.

When we cook Grits, we are communing with our ancestors; even when I am alone in my kitchen- the mothers, aunts and grandmothers are with me- informing me. Like taking care of a family- Grits have to be watched, tended to, kept moving- stirred gently with a languid patience, especially when they are absorbing the hot water of life. You learn to swirl the Grits into water that is at a rolling boil, then bring them down to a soft bubble- never stepping away from the simmer, taking the time to get it right, gently adding a bit of cool water if they start to thicken too soon- bring them to just the right consistency, turning off the flame, adding a bit of butter for richness; then covering with a lid almost like tucking them under a quilt. You learn this when you’re the cook, when you’re the nourishing caretaker of a husband, of a family or a community. You learn how much effort it takes to get it right, just from making a pot of Grits. The humble bowl of Grits-is proof that whether in a rundown shack, a double wide trailer, a lake house, a high rise beach condo or a country club- in the South we are all linked by a simple warm bowl of Grits.

You either like them or you don’t- but you can’t deny the allure of Grits- the generous big hearted food of the South is what culinary dreams are made of- in fact, I’m dreaming of having a Build Your Own Shrimp and Grits Party! We’ll top it with spicy shrimp, cheese, crumbled bacon, ham or Andouille  sausage- maybe some red eye gravy,  fried okra, bell peppers, finely diced purple onion and red tomatoes …what else? Well, my grits are getting cold… 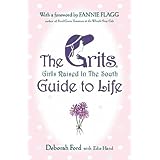