It’s a truth, the closer you live to a corn field the better your life will be. Okay, I know the corn stalks around here are just knee high to a scarecrow- still, there’s nothing like the taste of fresh corn. I recall the very first time this city girl tasted corn just pulled from the stalk- I have never forgotten it. It was a life altering experience. Honestly, fresh in the field corn is almost as sweet as candy! As soon as it’s pulled, believe me when I say- the sugar starts turning into starch, no comparison to fresh pulled.

There are old tales about folks who would send someone out to the corn field and tell them to stand ‘right ready’ for pulling ears of corn. Not one minute before the water starts to boil, someone else would holler from the house- ‘Pull the corn! now!’ And some were so crazy about fresh corn- they managed to get a big kettle dragged out to the field, hoist it over a wood fire, get the water to a rolling boil and actually cook it field side!

You won’t find that happening too often these days- but the truth is… Southerners do love our fresh vegetables- you’ll find us talking food, funerals, family events and fuming about the weather- especially this time of year! Now, soon there’ll  be family gatherings and celebrations, covered dish and potluck suppers coming up and we’ll need to take something special. I was fiddling around, trying to figure out a special dish to make while also working down the freezer; I came across a bag of shoepeg corn. Flash frozen uncooked corn- especially if it’s shoepeg corn is always a good substitute for fresh while we wait on this year’s crop! Shoepeg Corn is generally white uncut corn- the whole little kernels look like old timey shoe pegs, actually I always think of a little child’s offering to the Tooth Fairy when I see the kernels!  You might find shoepeg corn under the unremarkable name of ‘Uncut Corn’. What a shame! Not nearly as descriptive as shoepeg! Okay, so I couldn’t decide between making a Shoepeg Corn Salad or it’s variation- Cornbread Salad to send to a covered dish supper. Both salads have the little kernels of corn in them, I just made both, one to send and one to keep!

I made both from memory, but if you’re looking for a recipe in Southern cookbooks? The only ones I found were in old regional Alabama cookbooks. Not to be deterred- I realized that Corn Salads are an uncooked variation of the old recipes for Macque Choux, found mostly in the coastal South. The story behind Macque Choux is this- Native Americans showed the French Settlers how to make a mixture from corn, onions and tomatoes cooked quickly in fats or butter. Folks started adding other stuff, like lima beans, field peas; even bits of ham or tiny bay shrimp to the mixture depending on the region. Oh my! that sounds good too. Sorry, I’m going off on a tangent here- let me just tell you how I made it!

In a large bowl combine-

Gently toss the dressing with the shoepeg corn and cut vegetables – then salt and pepper to taste. Cover and chill. Can be served almost immediately but is better if made ahead so the flavors can meld. It sure looks pretty sprinkled with chopped parsley on a bed of  lettuce! 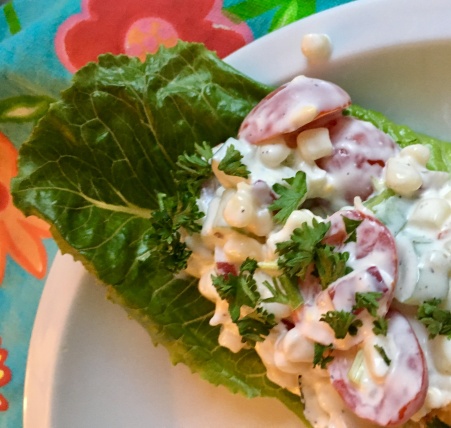 Y’all, this is delicious! Cornbread Salad is a great way to stretch a batch of Shoepeg Salad. Both stand up to being served as a picnic food but both are best served chilled.

Okay, here’s how I served Shoepeg Salad- on a lettuce cup alongside a baked sweet potato and with- oh my goodness, another wonderful treat!

Bacon wrapped Jalapeno Hushpuppies! Now, I want to tell you how to make homemade Hushpuppies sometime- but in the interest of time and working down the freezer, I had a small bag of ready made Fisherman’s Wharf® Jalapeno Hushpuppies- before I baked them on a parchment lined baking sheet- I wrapped each of the hushpuppies with a third of a slice of bacon and baked with the seam down! You may need to increase baking time until the bacon is done. Bacon Wrapped Jalapeno Hushpuppies  are so good, I would serve them as an appetizer! Dipping Sauce could be Jezebel Sauce or Cocktail Sauce. So. Good. as an addition to any meal! One of my new favorites! 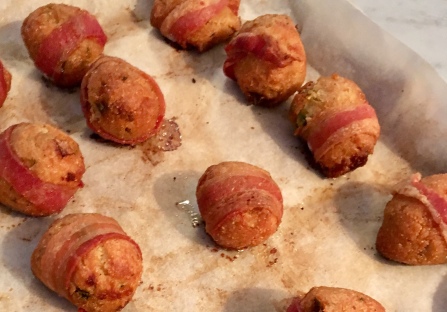 I hope you’ll try out the easy uncooked Shoepeg Salad! Now, I have to tell you- Somebody’s always getting on me about how much of this or that ought to be in there- well…I just make it like I like it! Please feel free to make Corn Salad anyway you like best! I would say if you add baby lima beans or field peas to it- please blanch them first! Diced ham or cooked baby shrimp would be a great addition also, though I would keep it chilled for any  addition of meat!

Now, keep in mind- the salad must have tomatoes, onion and corn to have true Macque Choux flavor! I’m taking either Shoepeg Corn Salad or Cornbread Salad to a Memorial Day Picnic that someone has decided to have early so it won’t be so hot and also, who wants to miss Coot’s Picnic on the actual Memorial Day in May! Oh me…

*All photographs are obviously mine.

*Fisherman’s Wharf® is a registered product. You should be able to find their hushpuppies or other brands at your local grocer’s.