Ok, I admit it, the mailbox is old and needs to be replaced… it’s one of those jobs we’ve put off doing. The mailbox isn’t in a great location to begin with and our other options aren’t that great. The postal workers are good sports about it, even though the red flag has been long gone and the mailbox tends to stand open almost all the time… to be honest it’s a busy box. We were surprised this year in early May to discover at the very back of the mailbox- there was a bird’s nest! Of all places…

Here at the cottage, we’re used to finding bird’s nests- one favorite spot seems to be right above the front door, which I frankly find charming. We don’t disturb those front door nests or any others we find. Occasionally we’ve had a front door nest fall on the doormat and tried to put it back, knowing it probably wouldn’t be used again, since we’ve touched it. Another favorite spot seems to be among the rose bushes along the picket fence out front. We know this, we don’t disturb them, we like them! To me, a bird’s nest is one of the most hopeful things in nature. This year in January, it was time to cut the roses back hard- they had become leggy and too tall, so we took a few inches off at a time, precisely to keep from disturbing any unseen bird’s nests, since we’ve noticed they’re used over again.  We found no rose bush nests this time, so the pruning was done… Now, I’m no expert on birding or bird nest building but I have to admit I have a strong admiration for their building skills- some are works of art and some are sort of messy but still charming.

We left one for several years- which had been built in a galvanized pitcher left on it’s side was under a little outbuilding. Finally we decided that it had been abandoned. That nest was so well built, I haven’t been able to dislodge it. I keep it, I love to look at it. I’ve even named it’s photograph- ‘Empty Nest’.  I’ve even built a few faux nests by using craft store ‘nests’ and embellishing them- especially around Eastertime.

The mailbox nest was a puzzle- weeks went by… we kept watch on it -no activity was detected. I even mused that perhaps it was a vacation home, since the only quiet time for the mailbox would have been on Saturday afternoons, Sundays and occasional Monday holidays. A few days ago, when I removed the mail, which included a package, several catalogs and a magazine.. and a long envelope, the nest came forward with the letter! I tugged on it to see if there was any sign of tiny feathers or eggshell shards….nothing to indicate that the nest had been inhabited. I snapped a picture and left it. Then, I engaged in some covert bird watching to see if a flurry of sparrows or finches or brown thrush would flutter around it. Nothing.  I named the photograph ‘Special Delivery’.

Later in the day, I removed it and inspected the mailbox nest further- a veritable work of art, look at the perfectly round entrance, protective entrance twigs and the edging of moss! Hmm…I wondered who had been pilfering the bright green moss I had used on the urns by the front door! Some little feathered friends! I marveled at the tiny birds who were making a lovely nest…far back in the darkened and dilapidated mailbox…. I have to admit, there was an element of sadness to think such a pretty nest had never become a place of rest for a momma bird to lay her eggs, raise her young, feed them worms from our garden and finally teach these little ones to fly- and yet, what lesson in nesting… of using our gifts, putting forth the effort to build a home and adding beauty no matter where we are!

* photographs are obviously mine. *Please don’t remove a bird’s nest if you find one…don’t disturb or touch it either, unless you find something unusual like this or an obviously abandoned nest! Thank you! 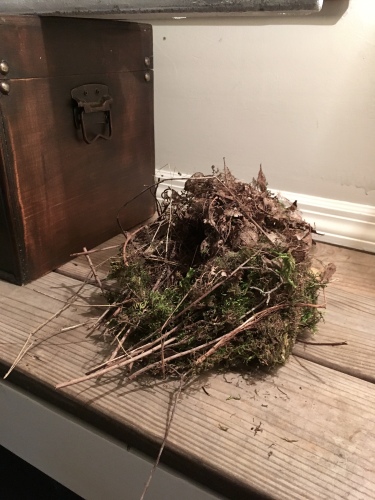 *I’ve put this one on display for now and I consider the nest to be a rare find, a natural wonder and a treasure!