Southern Macaroni and Cheese sits warmly quivering on a plate when it’s been scooped out with Sharp Cheddar Cheese strands as thin as guitar strings, mingled with a rustic egg Custard clinging to an absurdly small amount of round elbows of macaroni. This is the iconic comfort food of my youth- well, if you don’t count a hot bowl of buttered grits. My mother, my grandmother, my great aunts and their double first cousins all made it basically the same way. Some were busy homemakers who took care of their families, paste waxed hardwood floors, sewed draperies, our dresses and even doll clothes; others were busy working women who also found time to cook- but with an amazing affinity to cook food fit to eat. My grandmother was a busy florist who also took care of my granddaddy and her son who was a disabled veteran- there was no time and certainly no reason to mess up extra pots and pans to make a fine Béchamel Sauce when baking a dish of macaroni and cheese. Could she make fine sauces? You bet she could- and did. I recently found, written in her own beautiful hand*, a cheese sauce so delicate, it was unbelievable.

Still. Nothing so delicately wrought as a béchamel sauce fit her idea of what a big hearted  dish of common elbow macaroni and red wax rind Rat Cheese, as they called it, coarsely grated along with a seasoned custard made with fresh eggs and whole milk; apparently her folks agreed. Fresh from a hot oven Southern Macaroni and Cheese wasn’t made with a sauce- No, our family’s macaroni and cheese was fine- more than fine…mouth wateringly divine. It was a work of obscure art, barely noticed on a plate lunch- Mimi’s was a perfectly seasoned custard base with a triumphant topping of a half pound of cheese laced with a smidgen of bread crumbs if she took a notion or had the time and inclination.

The absurd thing about these home chefs, is that very few wrote down their wonderful but commonly served recipes. I’m always frustrated when I’ve tried to re-create the old recipes including classic Southern Macaroni and Cheese. Though, guess what? I rarely write the recipes down either! Always tweaking, trying my best to make it taste like the well remembered comfort food. And mostly I do a decent rendition of an old heirloom rendition. So much is about feel, taste, texture- the type of pan and whether it’s properly seasoned …the pan and the recipe! Maybe grandmother’s old cheese sauce recipe provided a new clue- and so did a recipe from her cousin Ruth’s basic Macaroni and Cheese- wisely bound into a family cookbook! Both jogged my memory of Mimi’s near perfect palate when it came to seasonings. The sauce had dry mustard and I certainly recall the familiar pinch of cayenne pepper!

Chef Scott Peacock recalls his own Alabama mother’s Macaroni  and Cheese; he makes note of the fact that ‘mouse cheese’ isn’t as readily available these days and  modern cheddar cheese ‘needs the addition of… dry mustard to heighten the flavor.’  Well, there you go- surely, my grandmother must have added dry mustard and cayenne pepper! All of these years…who knew what one little pinch could do? Some southerners put a bit of grated yellow onion in the custard, I prefer the tops of green onion on mine!

‘Only in the South would Macaroni and Cheese be considered a vegetable!’

Ah yes, go ahead and make fun- we can take it- because we never ate a whole plate of Mac and Cheese and called it a Meatless Meal…okay, we can’t because those green vegetables had bits of ham or Salt Pork and the Okra might be fried in Lard! The point is, we never ate just a plate of macaroni and cheese! Vegetable Plates are almost augmented with Macaroni and Cheese, Squash Casserole or Scalloped Potatoes- cheese dishes are always a hit as a side on a plate lunch. We all have childhood memories of someone, anyone who could make a meal with bits of meat, cheese and vegetables. Southern Macaroni and Cheese was considered a side dish and anyone who ate a whole rich plate of Southern Macaroni and Cheese- could bypass the emergency room and be taken straight to Johns- Rideout Funeral Home!  Rich, yes. Whole Plate of it. No. Side dish, yes! So, here goes my latest and hopefully greatest rendition of Southern Macaroni and Cheese. I’ll call it mine because I still can’t be sure it is exactly our family recipe- just as close as I can get! 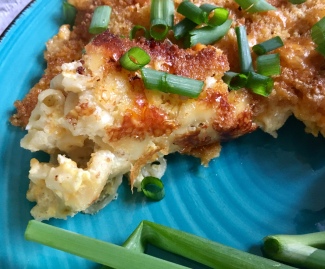 Method: Preheat oven to 350 degrees. Cook and Drain Elbow Macaroni- don’t over drain please. Allow to cool. Butter 9×9 glass baking dish. Spread Elbow Macaroni evenly on the bottom of the baking dish. For uncooked custard base: In a mixing bowl, beat eggs slightly- add whole milk, 1/3 lb of the grated sharp cheddar cheese, cayenne pepper, dry mustard, salt and black pepper. Blend custard mixture very well. Pour custard mixture over the cooked elbow macaroni. Drizzle 4 Tablespoons of Melted Butter over all. Top with scant handful of breadcrumbs. Bake at 350 degrees for 20 minutes. Remove from oven, briefly, the mixture will be puffed much like a soufflé so work quickly. Top with remaining cheese- there’ll be lots of it!  Bake at 350 degrees for an additional 10 minutes or until custard is set and the topping of crumbs and cheese is melted completely. (If the macaroni and cheese seems slightly soft- no worries…it will set as it cools.) Serve immediately! Serves 4-6 generously.

If doubled, this will make a nice buffet dish but should be set in a covered chafing dish to keep warm. It is good with stronger meats such as beef or ham, though most folks won’t turn it down no matter what you serve it with! A vegetable plate practically begs for it!

My grandmother’s food was a gift- and so was she! She seemed to have radar and knew when I was feeling low. The phone would ring and she would not suffer my whining, instead she would regale me with what she had been cooking. I recall one day, she had cooked a small roast beef, pale green butter peas, tiny buttered yeast rolls, a side plate of sliced tomatoes, radishes and green onions along with her beloved ‘Mac and Cheese’ and planned to take some to work with her the next day. My spirits were always lifted by her calls and her cooking. Her wit, her strength and her many talents still amaze me. I hope you’ll try Southern Macaroni and Cheese, it isn’t southern style, it’s the real deal.

12 thoughts on “Southern Macaroni and Cheese…”