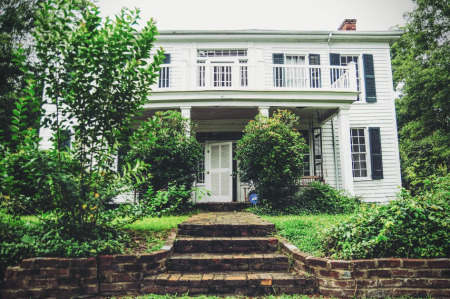 It’s Porch Sittin’ Time in the South… Actually we can Porch Sit all year round but it’s especially nice when the weather gets warm.  Some of my fondest memories revolve around porch sitting. Front Porches are mostly for company, greeting friends in the neighborhood, folks dropping by to say hello and sit for awhile. Front Porches were the original Neighborhood Watch. I recall a man who sat on his front porch rocker with a shotgun across his lap- when asked why- he said-

‘It ain’t loaded. But before the creek dried up and houses were built all around here- Daddy did it. He would shoot water moccasins or cotton mouth snakes right before we had a Baptism in the creek. I guess I’m just carrying on the tradition, though it does cut down on visitors don’t it?.’

Really? Stranger things have happened. Neighbors watched out for one another from their front porches, they knew what was strange or dangerous and the quacks or quirks. The five year old Al Capone who held up his grimy hand to stop cars and then motion them on after giving them a piece of his mind and banging the side of the offending car. Or,  when an otherwise perfect lady was laying in the road with bacon draped across her body. No one thought that was especially alarming- ‘Don’t worry about ‘er, every time that dog of hers gets out, she lays in the road- dog loves bacon.’ Talk of the weather resumed.

Porch Sittin’ is so fine, especially if there are Rocking Chairs… sip some sweet tea, have a heart to heart or don’t talk at all… it’s relaxing, eases stress. Of course you can tell the mood of folks by the pace at which they rock, fast talking Door to Door Salesmen rock quick, Book Readers rock even and steady, Tall Tale Tellers lean back- stretch their arms above their heads as others pause, then rock forward to hear better, Weeping Mourners stop and start, dab their eyes then slow rock awhile to regain their composure. One especially sweet memory is of a family circled up, holding hands and praying and there are those who form a Step Sing for the sole purpose of clapping and singing- long and loud to everyone’s delight.  The neighbors are encouraged to join in.

Front Porches used to be the entrance to budding Romances.

Front Porches in the South are notorious for Haint Blue ceilings and ghost stories. Haint Blue is an actual color that is said to keep the haints, wasps and yellow jackets away. Haints and Ghost Stories abound- there’s always an adult who’s willing to sneak around the house and jump out of the bushes at just the right time, invoking more havoc and squealing than a real Haint could ever do – unless it’s the town’s Peeping Tom who could run down an alley like lightnin’, talk about squealing ….

Porch Swings are pure pleasure for relaxing- I recall stopping by a house one Sunday afternoon,  an elderly man was dressed for company- he was outfitted in a suit and tie reading Herbert W. Armstrong’s Plain Truth magazine, getting his perspective on world affairs. There’s nothing like a Front Porch to contemplate life, to form opinions and to think. I love to see a porch full of family and friends, some in rockers, some on the porch swing, some leaned against the railing or with a leg thrown over the rail, talking and laughing and usually eating peach cobbler or a dish of homemade ice cream; children ripping and running in the yard to shouts from grownups saying,

One of my favorite memories is when my little girls would wake up from a nap, freshly bathed and dressed waiting for their daddy to get home, we would get up in the porch swing and sing. Their legs weren’t long enough to start the swinging so I would start us off, remind them to push their legs forward and then back to keep us going. Favorite swingin’ songs were ‘Swing Low, Sweet Chariot’ and ‘Rock My Soul in the Bosom of Abraham’. Nothin’ like it.  And nothing like a gentle breeze, the soft sway, the groan and creak of a porch swing to rock a fussy baby to sleep. 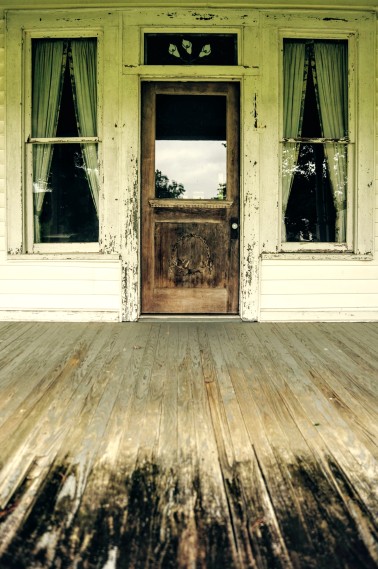 Back Porches were the work horses, never as spruced up and nice as front porches. It’s where muddy shoes are kicked off or brooms, mops and gardening supplies are kept. Bushels of peas, okra and corn would be shelled, shucked or cut, to the rhythm of a cushioned metal glider. Big Enameled Dishpans or Galvanized Tubs held in laps waiting for the bounty; a broom at the ready to clear off the hulls and husks. A basket of line dried clothes, diapers or sheets stood waiting to be folded on the back porch, always near the Clothes Line. The song for Back Porch Sittin’ was ‘Bringing in the Sheaves’ which I always thought meant ‘Bringing in the Sheets’. A play pen might be set up for small children to take a nap while getting some fresh air and a bit of sunshine. Neighbors might hook up several extension cords- drag their black and white TV and antennas out to the Back Porch- someone would man the broom to swat the Mimosa Tree so the Katydids would hush; otherwise Elvis, Patsy Cline or the Beatles couldn’t be heard  on the Arthur Godfrey, Grand Ol’ Opry or the Ed Sullivan Show. Back Porches are perfect for cranking homemade ice cream, eating boiled or parched peanuts, getting a haircut or watching the kids play in the hosepipe.

Ah, let’s not forget the joys of Screened Porches, a big wicker sofa piled with cushions and pillows maybe even a quilt is an invitation for reading or taking a nap; or my favorite- Night Watches with the heavy scented glow of magnolias and gardenias-

Listening to rustling bushes, hoot owls or the soulful night song of mockingbirds and whipperwills, trains running through or Storm Watching….I recall being held tight on a screen porch during a thunder storm- scared to death-

Carports, Decks and Patios just don’t have the same feel as Porches. Some affectionately call Screen Porches- Sleeping Porches when they stretch the length of the second story of the house and are lined up with mismatched cots or narrow beds.  The night air starts out sticky and then turns so cool, with whispers of ‘Are y’all alright? We’re alright.’ before you doze off…that kind of sleep is tranquilizing.

Folks don’t Porch Sit as much as they used to before central air conditioning. When long, low nice brick homes were built after the second World War even until now, whole subdivisions omit the front porch. The odd house with a front porch tends to be the most inviting home of the bunch. I hope these porches are actually used and enjoyed- not just for the styled look found on magazine covers. With the sad omission of the Front Porch on Modern Houses, folks began to get more isolated; they stayed to themselves. That’s a shame. Community and neighborhoods suffer. Porch Sittin’ is perfect in the South almost year round- bundled up in a quilt with steaming coffee in early evening or  sipping lemonade in the lazy days of summer; playing Old Maid, Go Fishing, Shoots and Ladders, Checkers or Yahtzee. You might even find a bit of romance, rekindle an old friendship or confirm your patriotism while Porch Sittin’ .

Vow to find a true blue Southern Porch this summer! Now, you know I’m gonna say this-  like all Southern tales this one is part myth, part truth and part outright lies- names have been omitted to protect the innocent. The whole truth is- Porch Sittin’ seriously needs to make a comeback!

*Most of the beautiful photographs of Old Porches of Alabama, including Haint Blue and the featured photograph- Porch Swing belong to Jeremy Miniard- www. Jeremy.miniard.fineartamerica.com to whom we are deeply indebted for his generosity in sharing his work. Other less spectacular photographs like the one below, the gardenias, magnolias, screened porches and rocking chairs belong to the Community of Camellia’s Cottage.