I’m blogging ‘live’ from The CAAS- in Nashville, Tennessee! We’ve been Chet Atkins fans for many years- the smoothest, most talented guitar picker, possibly the world has even known- at least in the country music industry. It is being held at the Music City Sheraton, I have probably seen only 5-6 cars unloaded which do not have guitars! There are 1000 people in attendance for four days of non-stop picking! They call themselves either ‘fingerstyle’ pickers or ‘thumbpickers’– which are styles Chet Atkins made popular. The sessions start at 9 a.m. and go until midnite- without stopping! At any moment- guitarists may start playing, in hallways or stages or meeting rooms! Some are amateur, of course but others are recording artists- who either played with Chet Atkins or recorded with him or that Chet Atkins produced their sounds with RCA. And the folks who attend are not locals, they have come from as far as Australia, Great Britain, Eastern Europe and Asia. There are workshops, collaborations, lectures and of course performances. Gretsch Guitars has a wonderful room, where a team is on hand to sell, adjust or repair and answer questions. Chet Atkins made several guitars famous, but his ‘Country Gentleman Guitar in Gretsch Orange’…is wildly popular to this day. 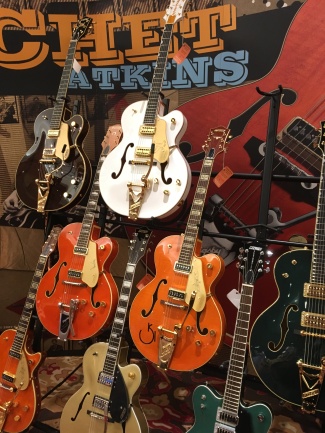 You can see Gretsch Orange below and between the black and white Gretsch guitars– I don’t know all of the names- but I do know the ‘White Falcon’ is also very famous. Wallace Guitars has a presence here as do other guitar makers- there is even a prototype of a Gretsch guitar, that is said to be worth over $75,000- you can still see the marks on it where Chet had them make modifications; along with other vintage guitars.

Chet Atkins, also known as ‘Mr. Guitar’, died about 15 years ago- however, one of the highlights for me- was watching Meagan Taylor perform- Chet Atkins was her great uncle and the family resemblance and talent is uncanny. Chet usually told an ‘old corny joke’ when he performed; these live performers are keeping that tradition alive. Now, I am going to share a few of them, but don’t leave Camellia’s Cottage without listening to the song that made Chet Atkins famous… ‘Mr. Sandman’. One of my personal favorites! *at the end of the post.

Here’s two of the corny jokes- One performer said he grew up ‘pore‘ like Chet, but that farmers in his hometown are getting more prosperous now- he told of a farmer that had saved enough to buy one of those fancy tractors- the salesman said- ‘It’ll cut your work in half’– the old farmer said, ‘Well, then…I’ll just take two of ’em’…. Another said when he first started out as a guitar picker, he would play wherever he could, whenever he got the chance- one night he was playing a club and he was real nervous. He ran to the men’s room before he went onstage. When he got on stage he began playing a few tunes but the audience was not even listening, much less clapping…so he opened it up for requests. He saw a man near the stage writing fast and furiously, the waitress handed the guitarist the paper- he hoped he knew the requested song…The paper said – ‘Do you know- Your Fly is Open?’ Nervously, he said ‘No sir, I don’t know that song!’ So, instead he played a familiar Chet Atkins tune… This time he got some applause…he leaned over low and took a bow. Emboldened by the applause, he stood and continued to play another Chet tune…the same man at the same table was writing out another ‘request’… Now, the guitarist was really worried…another tune he didn’t know?? He took the paper from the waitress- this time- not one but two songs on it…the paper read-

‘Your Barn Door is Open!’ and ‘The Horse has Gotten Out of the Barn!‘??

The guitarist paused and  said, ‘Where do people come up with these songs?’