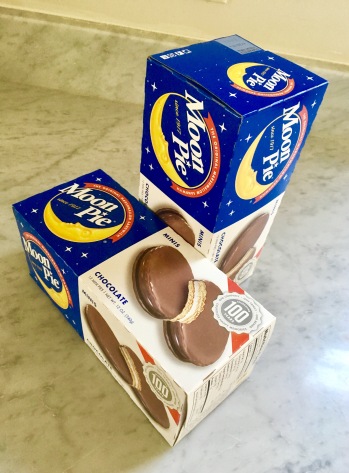 Well, here we are in the middle of February! And while the major holidays are over, February has several celebration days besides the big one- Valentine’s Day!  The Chinese New Year is rarely celebrated in the South but that doesn’t mean we don’t take notice-this is the year of the Fire Rooster, which began on January 28.  My sister usually informs me of what year it is after she picks up her dry cleaning or if I get a hankering for Chinese food, I let her know. We can rest a bit easier if we’ve been told- it’s a good year.  You can bet we know about Ol’ Red Roosters in the South.

And of course, I completely forgot about Groundhog Day until Weezie Walters told me that a neighbor has seen a groundhog- right here in our neighborhood! I don’t know about up North, but Spring has sprung here- Daffodils, Flowering Quince, Hyacinths are blooming their heads off right beside Winter lovin’ Camellias! This Southern Groundhog must have tunneled down here, and hasn’t met his shadow yet! I was told to watch out for something that looks like a beaver but with a bushy tail- now, I ask  you, when and where does one station oneself to watch out for a suspicious groundhog?

Southerners are a faith filled but naturally superstitious folk and February is the month for it! For instance, if there are big flocks of crows flying or landing in the yard, well we’re in for some cold weather. Some are consulting the Farmer’s Almanac even now, reading the signs to decide when to plant certain spring crops or watching moon phases for one reason or another.

Those who were watching the moon with their sweethearts on Valentine’s Day saw something special- Jupiter and the Full Moon had a late night rendezvous- here’s a Heart Nebula better known as heart shaped cloud of cosmic gas- oh lord, don’t let me get started on that one!

It seems like we’re always watching the moon, shooting for the moon, eating or throwing Moon Pies® in Alabama! I’ve been asking my local grocer when they were going to get Moon Pies in- no one knew; but they all wanted one! As I was headed out of the store this week I spied them, turned around, grabbed two boxes and went through the line again to buy them!

Moon Pies® are made in Chattanooga Tennessee which kisses the right shoulder of North Alabama and this is the 100th anniversary of this particularly Southern confection. They were the large cheap treat of working men- coal miners, factory workers, laborers and were famously eaten along with big swigs of RC Cola® which had a full two ounces more than other famous cocolas, as we say it. If flush with cash the working men were also known to buy a Grapico® and a small package of salted peanuts which they poured right into the bottle! Way back in 1951 Big Bill Lister recorded a song called ‘Gimme an RC Cola and a Moon Pie’ the combination was so popular!  Moon Pies® have never really gone out of style- still a favorite parade throw. Folks will risk their neck to get hold of one during a parade! I know this to be true, my husband bought cases of them to throw in parades for more than a decade. 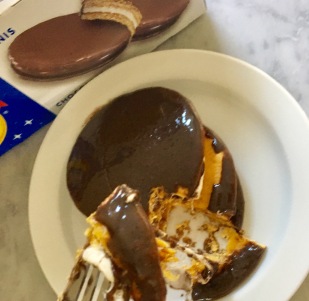 Here at the Cottage when young children wanted a snack and we were lucky enough to have Moon Pies in the house- it was a big treat to put one in the microwave for about 45 seconds and watch the marshmallow in the middle rise. A warm double-decker Moon Pie® can’t be beat! Recently, I saw a recipe for making homemade Moon Pies! Will wonders never cease? But really, I don’t think home bakers will put the Chattanooga Bakery out of business, making the big  four inch round graham crackers sandwiched with marshmallow, then coated with chocolate or yellow banana flavored icing continues to make us nostalgic.  There is even a story of a lady who really never knew how to cook, much less bake- who had forgotten to have a dessert on hand; not to be deterred she layered the Moon Pies in the bottom of a Pyrex® dish, ran them in the oven for a few minutes to soften, then topped the whole mess with whipped cream and maraschino cherries- then asked her guests how they liked her recipe! 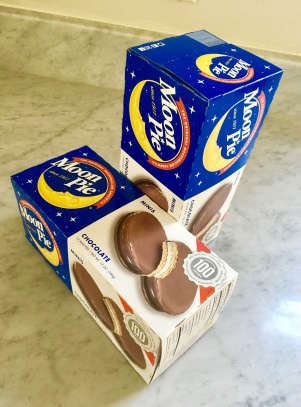 I’m told they raved over it. In Mobile, Alabama, since New Year’s Eve 2008, a big yellow lighted Moon Pie, is raised by a crane 200 feet in the air and slowly lowered, much like the Ball Drop in Times Square. The first year they had the world’s largest Moon Pie baked, that weighed 55 pounds! Lest you think, it’s only pore working folks and street revelers that like Moon Pies, consider that up in North Alabama, Saturn V rockets were built and NASA has a huge presence. It has been reported that any time a successful launch is made the preferred celebration food by Aerospace engineers is the famous Moon Pies® and celebrates the 1969 Moon Walk. Crazy in Alabama, maybe…February Fun for sure! In the meantime, I’m gonna get me a warm Moon Pie, an RoC Cola, a flashlight and go sit on the porch, maybe I can spot that bright eyed bushy tailed Groundhog!

* Groundhog. Almanac and Rooster photographs are public domain, Valentine Moon is from http://www.space.com and may be subject to copyright. All other photographs are obviously mine. Moon Pie, RC Cola and Pyrex are registered products and this is not a paid advertisement for any of them- we just love them! Visit http://moonpies.com/about for more information.