What you’re looking at in the picture above- is a gen-u-ine Southern Spitfire. You would have to know one to understand exactly what we mean by that in the South. Under a thin veneer of Southern charm, my grandmother Betty Jo Sparks Holmes was a Southern Spitfire. I’ve been told her mother was a beauty who rode fast horses sidesaddle! It’s her birthday, if she was alive she would be well over 100. We can’t know her true age  for sure, because-well, a Southern lady generally shaves a few years off. Even tombstones of Southern females may not reflect the actual age. Here’s what I know for sure-She came from a long line of warriors:

Her husband served in World War I, guarding Woodrow Wilson’s White House, living in tents on the grounds- he was a very handsome man. My grandmother tickled him to death with the things she said- particularly when her green eyes were flashing! Her son, served as one of the youngest pilots in the Navy during World War II, flying off of aircraft carriers in the Pacific. She adored him, caring for him most of his adult life as a disabled veteran. He had a lot of problems, but Mimi never allowed any criticism of him, at all. She was a fiercely patriotic American who loved FDR and his First Lady Eleanor, admired John Kennedy and Jimmy Carter, probably because they served in the US Navy, like her son. I’ve inherited her favorite novel, Gone With the Wind, purchased when it was considered a very racy book! Scarlett O’Hara is the best representation of a Southern Spitfire in literature. My grandmother looked nothing like Vivian Leigh except for the flashing green eyes! However, some of the things Scarlett said could easily apply to Mimi-

Betty Jo Sparks Holmes raised her family, including her younger sister Mary Sue, her younger brother Charles, my Uncle Chig and my mother, Betty Gene- during the Great Depression. She was one of the finest cooks I have ever known. She learned to cook, not because she had to, but because she loved to be in the kitchen with the household cooks. They humored the feisty Betty Jo, by letting her make biscuits, which she would load into a small wagon, take across the tracks and sell to laborers for pennies, knowing when she got home she would be in a mess of trouble! Only to do it again, the next time she got close to the kitchen! 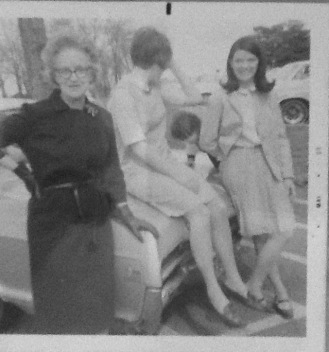 She became a florist at age 55, when most women were homemakers, her income was necessary. She had a great sense of style and good taste, but wasn’t uppity. Her life could be described as ‘grit with grace’. I loved that about her. I can still hear her now- the impression of her strength, wisdom and strong sense of humor inform me all these years since we lost her. She was a Spitfire but she was one of the most generous people I have ever known. ‘As God is my witness’…No one ever came to her door and left hungry, empty handed or without comfort. Like most Southerners, she engaged in a bit of ancestor worship. Mimi didn’t tolerate weakness in me. My older sister was probably her favorite- however, she gave me large chunks of her time and the best advice I have ever received- ‘Stop crying, hold your head up and don’t ever forget whose child you are!’ Now, if that is not advice from a Southern Spitfire? I don’t know what it would be. Happy Birthday Mimi, I’m a better person because of you.

Photographs are mine. The top photograph was taken in the 1920s with Mimi’s bob and scandalous short dress holding her son and baby brother J.T.. The photograph on the right was for my sister’s high school graduation, the photograph on the left- Mimi is holding me at Christmas on her lap. The photograph of Vivian Leigh- the indomitable Southern Spitfire- Scarlett O’Hara in Gone With the Wind by that great southern author, Margaret Mitchell, is public domain.