It might come as a surprise that the Appalachian Region is apple growing country. Settlers from Scotch Irish descent brought apple seeds with them to grow in the new land… with the help of Cherokee Indians apples became widely grown. With temperatures dipping into the 20s and highs in the 80s – the plateaus produce apples from late July on into late fall. Some heirloom varieties grown in the Appalachians are still considered excellent. My home county is at the tail end of the Appalachians and almost all old home places had at least one or two apple trees, it was encouraged as a way to make property more valuable and of course as an extra food source! The uses for apples is legion, from-

The beautiful Blue Ridge Mountains, in the southern part of the Appalachian Region, is one of those apple growing regions. In the upper western corner of Georgia, the entire area is a popular tourist attraction and apple picking territory. Beginning to ripen now, a few days ago, I bought some Blue Ridge Apples; I was especially glad to find these. The skins aren’t tough and thick, this current crop of apples aren’t overly sweet, have good texture and are a beautiful deep red- just perfect for a quick breakfast, a lunchbox treat or an afternoon snack.

Fresh Apple Cakes are legendary in the South, the mere mention of one is followed by swoons. Any southerner I know loves a snack of apples and peanut butter; a nutritious lunch for almost any school kid is a peanut butter sandwich and an apple!  I couldn’t resist coming up with an easy apple cake- snack size with the addition of peanut butter…well, let’s just say I surprised myself! These Blue Ridge apples don’t even require peeling, the whole cake can be made from common pantry ingredients and from start to finish, in about an hour, including bake time, you’ll have a Blue Ridge Apple Cake!

Here’s how you make-

Preheat oven to 350 degrees Combine flour, brown sugar, cinnamon and salt. Cut in small pieces of Butter until crumbly. Add Apples and Peanut Butter- this mixture will continue to be crumbled in texture. 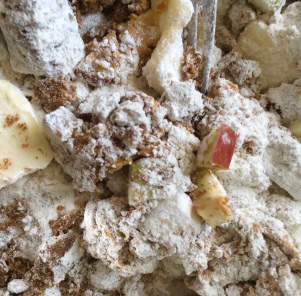 Press half of the mixture in the bottom of a glass baking dish (9×9) as you would for a crust. Combine baking soda and sour cream. Mix well. Add in the slightly beaten egg. Add this mixture of sour cream/baking soda and egg into the remaining crumb mixture. Stir gently to combine. Pour this mixture over the top of pressed crumbs. Decorate the top of mixture with thinly sliced apples. Sprinkle additional cinnamon and brown sugar. Put small dollops of extra peanut butter on some of the decorative apple slices. Here’s how it comes together- 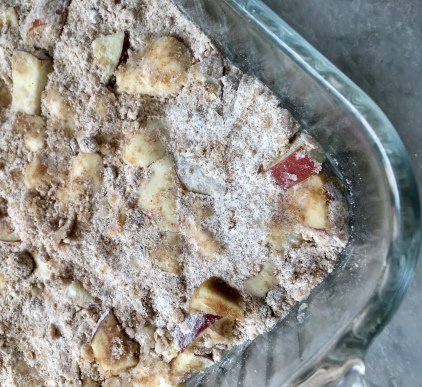 *Variation: Add a sprinkling of chopped peanuts if you want to guild the apples! Bake at 350 degrees for 40-45 minutes. Cool then, cut into squares. 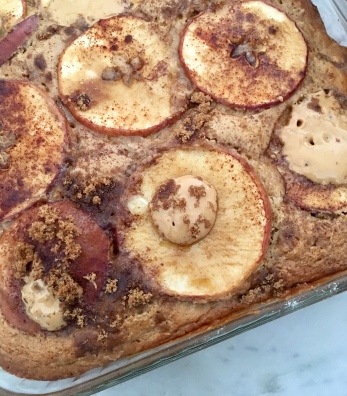 I know I said to cool the cake, but it is very good slightly warm! Cover tightly. Blue Ridge Apple Cake keeps very well,  and retains it’s moisture. The Appalachian region continues to be one of the poorest regions in our nation, it is wonderful to be able to support the farmers there in such a delicious way!  And… Alabama is a state where George Washington Carver’s research has provided many folks, like me! with a love of parched peanuts, roasted peanuts and oh yes! Peanut Butter! Blue Ridge Apple Cake seems like a match made in heaven with the combination of Apples and Peanut Butter!

*all photographs are obviously mine! September 14 is also National Peanut Day! You have permission to eat all the peanuts you want!