Biscuits and Cornbread are iconic Southern quick breads- made from scratch in a short period of time. Both lend themselves to wonderful variations. Drop Biscuits may have been the easiest of homemade breads, but cracklings added to cornbread- well, it’s from a time not all that many can recall, yet- Cracklin’ Cornbread was and is considered a delicacy. 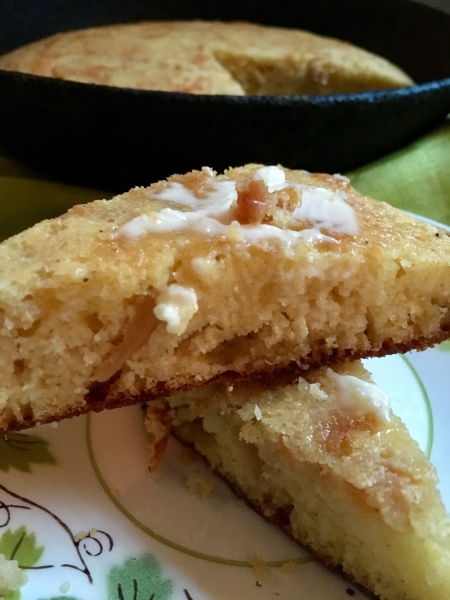 The first time I recall eating a drop biscuit was when my momma realized she had forgotten to make bread for supper- which was well underway. Drop Biscuits in their purest form are made with a sticky biscuit dough and dropped from a spoon onto a greased sheet pan, then baked. The result is a unique biscuit with a bit more crunch than a normal biscuit due to it’s rough irregular shape, these Cheddar Chive Drop Biscuits are a double variation because ours are made in a cake pan; the result is a tender savory biscuit. Yet, they would be just as good dropped and baked separately on a sheet pan. Here’s how to make:

*Travel Tip: Pioneer Baking Company was founded in 1851 by a German pioneer, C.H. Guenther, his baking mixes were a boon for working folks and pioneers since everything but the liquid was included and could be cooked in wood stoves or campfires.

Today, if you go to San Antonio, Texas, make sure to go to the Guenther House on the grounds of the Pioneer Baking Company. The house is a restored treasure and the food- oh my! the food is wonderful- a must see and do in San Antonio! An American treasure, where you will find more than just his baking mix- there are waffle and gravy mixes that are wonderful too! Get there early, there’s always a line! Breakfast there is a real treat- just one of their light fluffy biscuits buttered with pepper jelly is divine. If you can’t go there, be sure and try their products!

As a side note- in case you’re skeptical of the German contributions to Southern food, it is believed that Chicken and Dumplings were introduced by Germans who devised a chicken stew with a thin dumpling laid on top, then steamed. Early Germans who came to this country in the early 1700’s contributed in so many ways to American cuisine!  Who can imagine a more iconic dish than Chicken and Dumplings! 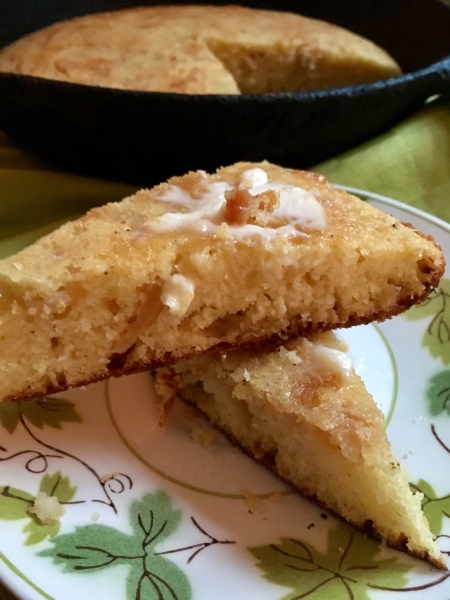 Cracklin’ Cornbread may disappear if we don’t keep making lard in this country and saving the bits from the bottom of the rendering pots! I know folks who recall hog killings- and the big black iron pots in which lard was rendered from the fat and pork skins, tended mainly by the womenfolk, while the men were handling the larger portions- like hams, shoulders or sides of bacon.

You simply cannot make authentic Cracklin’ Cornbread without genuine cracklings- recently I could only find one grocery store which stocked cracklings in my area. Cracklings aren’t bagged Pork Skins that we all enjoy. Here’s how they look – 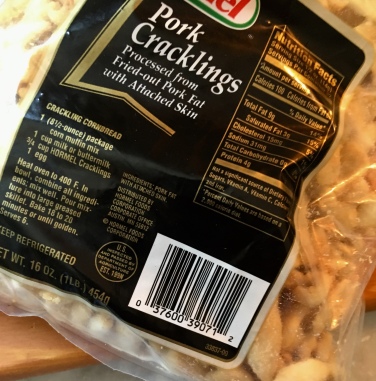 Cracklings need to be kept chilled or- if you don’t plan to use them often, cracklings freeze well. When times were hard, a pan of cracklin’ cornbread and a bowl of pot likker provided enough vitamins and minerals for survival. I like my cracklin’ cornbread on the thin side, not a big hunk, it’s crispier and has more flavor. The cracklings will become soft and chewy. Here’s how you make-

We’ll have to wait for another day for that recipe! We learned how to make cornbread from Native Americans who were thought to mix up the meal with water and bake hoe cakes over an open fire. Leave it to Southerners to figure out how to make cornbread in all of its many variations! I never add any extra ingredients to crackling cornbread, but I do love Mexican Cornbread filled with cheese, corn and jalapenos. Imagine! Just the wonderful variations in Iconic Southern Foods named here- which had their origins in many different cultures- German, Native American, Mexico, Africa, Great Britain and Jambalaya? French Canadians!

Southern food is our history on a plate or in a cast iron skillet. History that is hard, devastating and  not ever easy to talk about… yet over stoves, sinks and community tables… our differences fade and our pasts come together like an amazing spice blend- each one adding an ingredient, method, heat or even madness stirred into a combination that’s not just fit to eat– it’s a  smorgasbord, an amazing feast for the soul and the senses. Southern Food is a melting pot of what we call- Home Cooking.

*Pioneer® Baking Mix is registered product, as are Hormel® Cracklings. This is not a sponsored post by either of these fine companies. *All photographs are obviously mine.