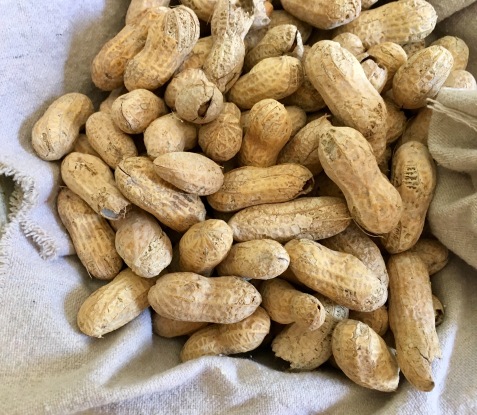 Parched is the Southern term for Roasted in the Shell Peanuts… Peanuts have always been grown in the South, yet when the Boll Weevil wiped out Alabama’s Cotton Crops in  in the early 1900’s, we came to fully appreciate the value of peanuts. George Washington Carver, at the famous Tuskegee Institute had been busy experimenting with the humble peanut.  By 1916, the scientific study of peanut agriculture was an effort to replenish soil depleted by constantly growing cotton, Carver introduced the South to the benefits of Crop Rotation! And Yes, it was the humble peanut, which rebooted the soil with nitrogen. Peanuts are actually legumes, not tree grown nuts. But what to do with all of those peanuts?? Smithfield® Hams boasted feeding their hogs with peanuts. Peanut Butter became a staple in the Southern diet.  Virginia, along with other southern states takes pride in Peanut Soup. Carver himself offered over 100 ways to use peanuts. However, this Southern snack food, the Parched Peanut had to be among the Top Three Favorites…

Folks tend to sit or walk around with a warm brown bag of parched peanuts! Peanuts are harvested from June to September. They are washed of the soil, then put on long tables in the sun to dry… these are what we call Raw Peanuts. When the raw peanuts are dried sufficiently, they’re put in big burlap bags and generally hung from barn rafters to store and dry out before being sold to markets or parched at home as a special treat. Believe it or not- even at the finest soirees- it’s not uncommon to find a big bowl of Parched Peanuts.

Peanuts are not the southern cash crop they once were; however small farms still grow peanuts for enriching the soil and for private consumption. There are some who parch shelled peanuts, however, there is nothing like the flavor of peanuts roasted in the shell, the aroma is wonderful! A curious thing about Parched Peanuts is that there is no specific recipe for them!

The only way I know to tell you how to parch peanuts is the low heat method 250 degrees up to 350 degrees, then after 30-45 minutes…check. It could literally take several hours…

You will get the hang of burning your tongue when you check the peanuts. The husk is dry, the skins are dark red and fall off easy. If the peanut is still chewy not crunchy– put back in the oven.  Then there is always an instinct to parching peanuts. There are surely those who are born to be Parched Peanut Whisperers or Sniffers…they have a knack for just knowing… Burnt peanuts are awful…I say this with experience! Throw them out! However, I do recognize the time to check is by the nutty aroma. These days, I buy bags of ‘roasted peanuts’ – they will be stale… To revive them.. Parch peanuts in the shell on a single layer at 300 degrees for…well at least 30-45 minutes; checking after 30 minutes. Then comes a knowing… the sweet aroma of fresh Parched Peanuts… I whisper a sigh…

Now, listen darlin’ , Cotton may no longer be King in Alabama, yet every time I get a whiff of Parched Peanuts… I know he’s makin’ a comeback! Thank You Lord for the beauty of this red scrabble hard Alabama dirt, for fields ripe with harvest when the Cotton is high and for the humble peanut!

*Our heartfelt prayers are with the wonderful people of the South’s Sunshine State, Florida- for safety and shelter from Hurricane Irma.