Fried Okra! This Southern Favorite has been around as long as anyone can remember and without exception is remembered fondly! So fondly that one friend named her precious little Dog, Okra. I’ve been told that a man who had a particular fondness for Okra named his two daughters Okra and Hibiscus! (Okra plants bear Hibiscus-like blossoms and are in the same plant family!) Those were brilliant names; a guarantee that everyone would love those girls! However, Okra is an acquired taste for anyone who was born outside of the South- there are whines that it is slimy (and it is slimy unless it’s fried)  Folks also wonder ‘Why anyone would eat Okra!’ Well, okra that is not fried, is used to thicken the finest gumbos, the best pots of vegetable soups, and a pod or two placed on the top of a pan of simmering Field Peas, Baby Limas or Speckled Butterbeans- makes the broth thicker with a distinct flavor that cannot be achieved by any other means. South Carolina touts Okra Soup- a comfort food for them, associated with being home… A friend who is an only child– (this is an important point)- had one grandmother who would fry up a mess of okra, put it in a large bowl and he would eat it like popcorn! Many have actually dubbed Fried Okra as Southern Popcorn. 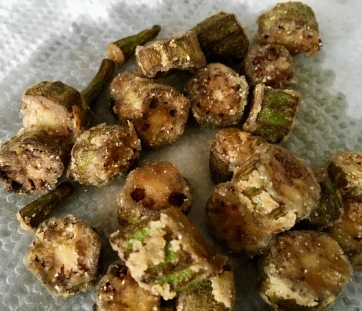 The most difficult part of making Fried Okra is having enough fried okra to begin with, then actually getting a full platter to the table! Folks will actually stand in the kitchen while it’s frying and eat it right as it’s being pulled out of the hot grease! So, rule 1- Don’t let anyone in the kitchen when you’re frying Okra!

I believe the very best Okra is no longer than the average size pinky finger in length. *If it is longer, discard or cut the bottom part as larger Okra can be woody and tough.  And the quicker you fry it after it’s picked the better it will be!

Everyone has their own method of frying Okra, always in hot grease; How to bread or batter Okra before frying can be debated. All I can say is that I don’t like a heavy batter on Okra as it can get soggy. Actually, I don’t batter Okra at all, I don’t flour it, I don’t just dust it with cornmeal– I whisk a bit of salt with 1/3 part Corn Starch to 2/3 part Self Rising Cornmeal, soft grind and white meal. *Using Corn Starch is my grandmother’s secret! It makes Fried Okra stay crisp longer!

Now, if you want to make sure you have enough for folks to enjoy, buy lots of Okra at the Farmer’s Market!  Allow a whopping 1-2 lbs per person! *Any leftover Corn Meal Mixture and a few pods of Okra- add a whisked egg and a bit of water or milk and thinly sliced okra to make a loose batter which will in turn make wonderful Okra Patties! 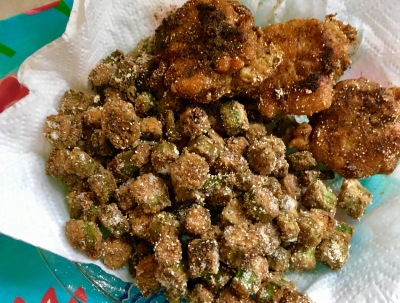 You may be wondering what we eat with Fried Okra, the answer is actually everything… a few months ago, one of my dearest friends and I ate at a BBQ dive which also serves our beloved Southern Vegetable Plates! When I ordered my BBQ sandwich, my ‘choose any side’ was Fried Okra!

In fact Fried Okra elevates any meal to a Southern Specialty! If you go to the Farmer’s Market this weekend, get some fresh Okra for Sunday Supper! Fried Okra, Country Ham, Butterbeans, yes Ma’am!

Please join Camellia’s Cottage in praying for the residents and emergency workers of entire Coastal and Lower South which may be affected by Hurricane Harvey. * Fried Okra, Country Ham…is a play on a famous fraternity ditty *All photographs are obviously mine! *I use Argo Corn Starch but this is not a paid advertisement for the brand