If a Southern girl tries to speak French, it’s gonna come out sounding strange… so I won’t try to translate Boeuf en Daube for you… pictures speak at least a few words. My foray into my beloved cookbooks yielded some much needed therapy and also inspiration for winter cooking in a New Year that’s mostly begun in fits and starts. Oh, I had plans, if not resolutions for this, beginning our third year here at Camellia’s Cottage and also personal goals. As usual, I found myself getting sidetracked- almost everyday. For instance, an invitation … ‘Meet me at the cemetery, then we’ll go to lunch’ sounded much better than cleaning out my closet on a day that we finally had some sunshine. It’s true, in the South- we take anything death related seriously– especially funeral food and ancestor worship. And…I had read about some Europeans who are doing what we Southerners have done for years- Death Cleaning – which isn’t nearly as morbid as it sounds. It’s simple- at certain age, women start asking their heirs to pick out what they want from the family heirlooms-

That’s where Boeuf en Daube comes in- it’s a fancy run of words for Beef Stew- which takes 2 days if you want full flavor and uses up leftover Roast Beef in a delightfully exotic sounding way. Now, a true Boeuf en Daube is very much like Beef Bourguignon, which is also a Beef Stew with lots of red wine and spices in it. Julia Child made it a household name, though few of us could pronounce it, including me. Still. It sounded good. I’ve never made one that I liked- however, the concept of Boeuf en Daube tickles me because it really is a true, No Peek Beef Stew and those French folks mean it, their language just makes it sound nicer.

Daube can either refer to a hearty slow cooked stew usually made with beef- typically using cuts of meat that are tough unless they are cooked low and slow… OR Daube can refer to the vessel it’s cooked in- which was often a covered clay pot.

Now, really I love the Southern implication of Boeuf en Daube because those pesky Dirt Daubers we deal with here, might look like wasps but they cover themselves with a nest of tubular Clay! Nowadays most of us Human Daubers use Dutch Ovens to make our Beef Stew! The point of a Daube is to cook the stew covered. My own personal version of Boeuf en Daube uses leftover Roast Beef. The Roast has been generously salted, peppered, lightly coated with flour- seared dark brown on both sides, then cooked low and slow with root vegetables of red potatoes, carrots, onions and is seasoned with celery, garlic and maybe a few herbs. Beef Stock is added once the whole thing is under way on top of the stove and then cooked in the oven for several hours. 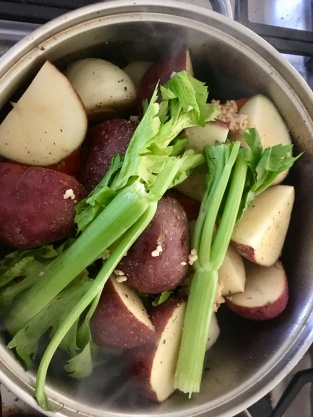 It’s served simply with a Green Salad and Garlic Bread or for Sunday, I might have Baby Green Limas, Biscuits and Gravy or Hot Buttered Corn Bread and other side dishes. For some reason I like Roast Beef best in Winter. 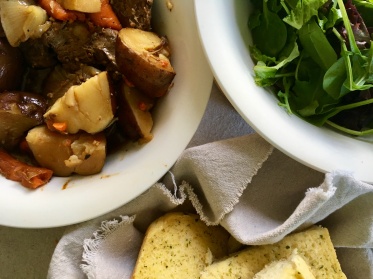 There’s usually leftover Roast Beef for Open Face Sandwiches with Gravy and a side of Mashed Potatoes. But this time – the roast was large, the beef was tender and it seemed a shame not to make a Boeuf en Daube- a Southern one, I think. I did find one similar to mine in *Jubilee!- the Junior League Cookbook of Mobile, Alabama.  Theirs was made from scratch with cubed beef, seared and seasoned with onions and carrots- no potatoes. Here’s how to make mine.

There you have it! Several New Year’s resolutions in one bowl! A money saver, more home cooked meals, cleaning out the fridge, freezer and pantry and elevating an everyday dish to something extraordinary! It was served with a mid century favorite- cling peaches stuffed with a mixture of a small amount of reserved juice, cream cheese, a bit of mayonnaise and chopped pecans on a bed of lettuce!

Not to get all historical on you, but Beef Bourguignon and Boeuf en Daube (without the crust) were both thought to improve in flavor if chilled overnight so the flavors could meld and then be reheated! Both would be a wonderful winter family meal, shared with new neighbors or as a bereavement dish. I hope you’ll try it- maybe yours will be a Poulet en Daube! Pot Pie, Chicken or Beef is a Southern Comfort Food anyday of the week!

*photographs are obviously mine. * Jubilee! the Mobile Junior League is a classic cookbook, I found mine on Amazon.com Their recipe for Boeuf en Daube on 85th Street is a much more complex dish than I made and is sure to be delicious!