Bighearted Cornbread is a staple of Southern food culture. Over the years we’ve taken some abuse about lovin’ our Cornbread- you know songs like ‘Jimmy Crack Corn and I don’t Care’ and ‘Just a Bowl of Butterbeans’ don’t exactly conjure up fine dining.  And Yankees have gotten hold of the Southern recipe and tried to improve on perfection by adding sugar- which is sacrilegious  where I’m from. Southern Cornbread is made with self rising cornmeal. I will say it again, my grandmother had rules when it came to cornbread. There are two basic types of Plain Southern Cornbread-

Beyond the rules for Plain Cornbread, you will find out just how Bighearted Cornbread is! It takes to having stuff added to it like Cracklin’ Cornbread which is so amazing I’m surprised it hasn’t won top notch culinary prizes! (For the unitiated, cracklins are rendered pieces of pork fat) Cracklins are not smoked like bacon but little chewy bits of pork which are stirred into the batter before it’s baked right into Bighearted Cornbread. Eat Cracklin’ Cornbread and you’ll be happy as a dead pig in the sunshine. Just remember Cracklins’ aren’t Bacon- I’m not sure you can even get them outside of the South. Bighearted Cornbread will accept Crumbled Bacon too!

Now, darlin’ let’s just get this out of the way- Bighearted Cornbread Batter is stirred up either thicker for Hushpuppies, best with chopped onions added, or a more cake batter consistency for Corn Sticks and Corn Muffins. Cornmeal Patties (little fried corn meal cakes- similar to pancakes in shape, form) call for a thinner batter. Bighearted Cornbread will satisfy you no matter what shape it’s in! Old Timers are fond of teaching the Mathematical Equation-telling children, ‘Pie are square, Cornbread are round’– referring to square Fruit Cobblers and Iron-Skillet-Made Cornbread. I am the Third Generation Owner of the Family Iron Skillet. Blessed is the Southern girl who inherits an iron skillet! Cornbread is the Bighearted accompaniment to Spicy Chili, Hearty Soups, Beef Stews and of course Chicken and Dumplings. 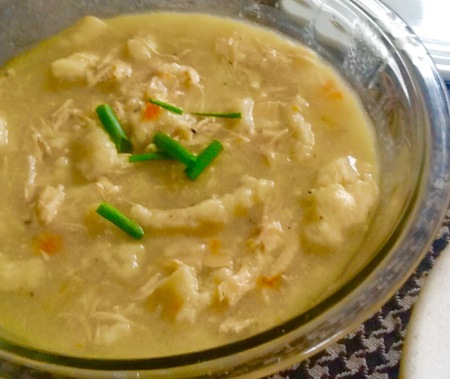 Recently in one of my old Family Cookbooks I found a recipe for a Bighearted Breakfast Cornbread made with lots of Caramelized Onions, browned Hot Breakfast Sausage, Shredded Cheese, then topped with a half recipe of cornbread batter- baked in a hot oven until golden brown. I topped it with a Fried Egg with fresh cracked pepper and a Baked Apple on the side. It was to die for. 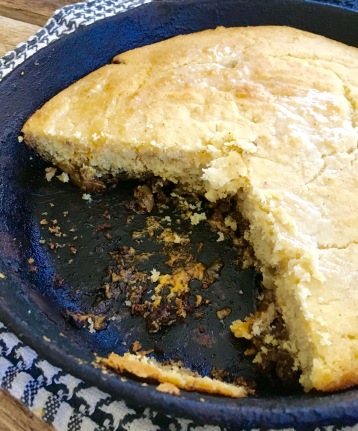 These are just a few examples of how Bighearted Cornbread can accept all manner of ingredients, adapt to the seasons and made into satisfying low cost meals. Bighearted Cornbread might not be the prettiest Belle at the Ball, but she’ll wrap her arms around you and say – ‘Welcome Home, Darlin’…

all photographs are mine for better or worse…

Alabama has thrived on cornbread for generations, all of us, not just some of us. We all love it, eat it- crave it, need it. I learned the cornbread rules at an early age from my grandmother. I have her iron skillet and it still makes the best cornbread, though I do love corn muffins too!

And oh my! corn sticks! I have an iron corn stick pan too! But the rules never change. You are the first to know my grandmother’s rules. Use your own cornbread recipe, with one exception…which we will cover first.

Are you getting a picture here? Commit these rules to memory, learn to recite them in your sleep. Now, a little test to see if you got it…I will list some foods and meats, see if you can answer the correct type of cornbread to go with each. I’m watching so don’t cheat! the answers will be at the bottom of the page.

I made some the other day! Yum! and what kind of cornbread do you think I made? Ok, here are the answers-

Here’s a trick question…What if you just have a vegetable plate? We do love our vegetable plates here in Alabama…the answer is… it depends…my rule of thumb is that if you have something with ‘dairy’ in it like macaroni and cheese- go with the buttermilk cornbread, that’s the ‘heavier’ meat rule.  If you have a ‘mixed’ vegetable plate, egg cornbread will always be good, and if turnip greens are anywhere on any plate? cornbread is a must!  If you have any questions or comments- would love to hear from you!

For Buttermilk Cornbread: Heat oven to 375, pour 1/3-1/2 cup of oil, shortening or lard (yes, lard) into cast iron skillet as above, quickly mix 1 2/3 cup of self rising cornmeal with 1 – 1/3 cup of buttermilk until just mixed and not too thick- you can add more of either – mix should look thicker than pancake batter. Stir in very quickly about 1/3 cup of hot oil and then pour batter back into the pan. Bake for 20-25 minutes or until golden brown- this cornbread will be thinner, crisp on the outside but very moist on the inside.

Make some cornbread! Mine’s about to come out of the oven!  Love y’all, Camellia